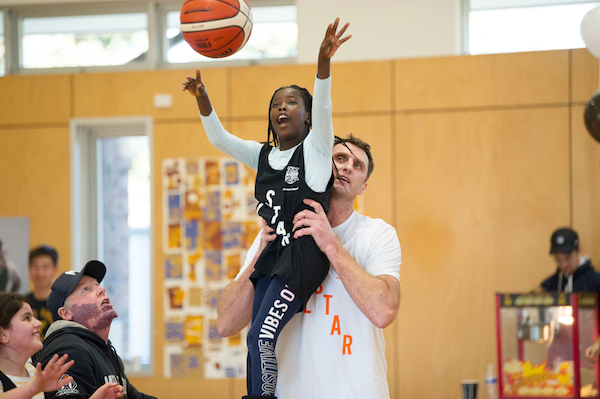 How many free throws could you shoot in 15 minutes? That’s the question we asked our supporters again this year at the 24 Hour Charity Shootout, which took place on July 14-15 at Albert Park College in Melbourne.

Over 250 people put their hand up to take part and chose their preferred 15-minute time slot to fundraise in the lead up to the Charity Shootout. Those unable to make it to Albert Park College participated at their neighbourhood hoop, stadium or backyard and did their 15 minutes of shooting in their local area. Participants flowed through the venue across the two 12-hour days, and were given the spotlight during their 15 minutes with over 100 volunteers on hand to rebound, count shots, and encourage those taking on the challenge. For many, it was a serious undertaking to see how many shots they could make, but for others it was just a chance to have fun, support Helping Hoops, enjoy the festivities, and bring their friends and family down to be part of the festivities. 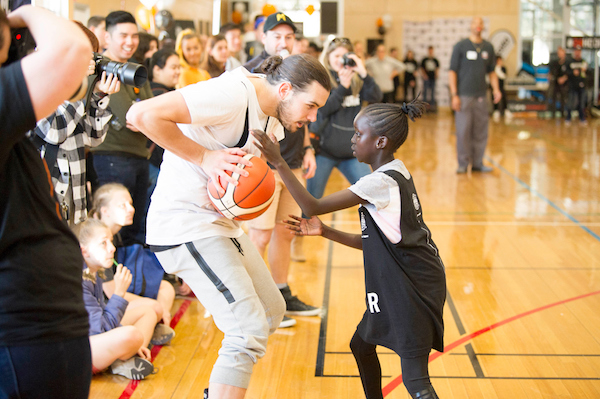 Of all the attractions on offer, a clear favourite was the Celebrity All-Star Game held on the Saturday which featured Chris Goulding and Mitch McCarron from Melbourne United, former NBA and NBL star Chris Anstey, current AFLW player and former WNBL champion Tegan Cunningham, Melbourne City goalkeeper and former Matildas player Melissa Barbieri, and Patty Miller from the hit TV show Married at First Sight. The celebrities teamed up with children from across our 10 Helping Hoops programs and played a number of games in front of hundreds of spectators, who packed Albert Park College to watch the action. The games were a chance to showcase our kids and their skills, and show the public just how much fun it is to be part of the Helping Hoops family. The celebrities kept games close, with a number of buzzer beaters needed to decide games, and created some life-long memories for participants. 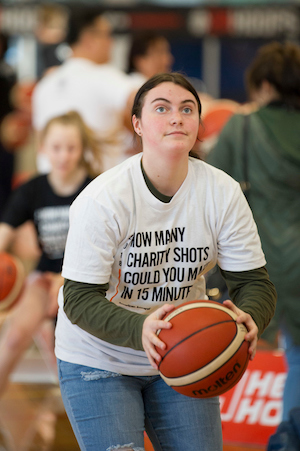 The final results of this year’s 24 Hour Charity Shootout will not be announced until July 30, but for now what we do know is that our fundraisers combined to make 23,417 free throws in total at Albert Park College, and the current fundraising tally sits at $68,361. Both these number will go up over the coming weeks as fundraisers receive more donations and those shooting their free throws in their local area check in with us with their results. We also know the winning score, which was 296 free throws in 15 minutes. That works out to be one free throw made every three seconds. We will announce the winners of each category (overall, junior male/female, and most made in local area) in the coming weeks, along with prize winners for fundraising and more.

We would like to thank all those who took part in the biggest and best 24 Hour Charity Shootout ever. A special thanks goes to Basketball Victoria, which generously donated $20,000 to the event in support of Helping Hoops and ensuring basketball is a game able to be enjoyed by all children, no matter their background or challenges. We would also like to thank American Apparel and Gildan Australia for donating T-shirts to all participants and volunteers, along with the uniforms worn by all our kids and celebrities at the All Star Game. New Era also stepped up with NBA caps for all participants, and we appreciate their support of the Shootout. Chase Basketball have donated use of the gymnasium at Albert Park College for six years now, and we really appreciate the ongoing support we enjoy from Nigel Purchase and his team. Thanks also goes to Melbourne United for not only supporting by providing players, but for also bringing along the championship trophy for all to enjoy and providing key event support and prizes. Our friends at Goalrilla, Crown Resorts, Max Events, Neverfaded, Beyond Rest, Prince Alfred Hotel, Vinomofo and Molten also deserve a massive thank you for donating prizes and making the 24 Hour Charity Shootout the event it is. 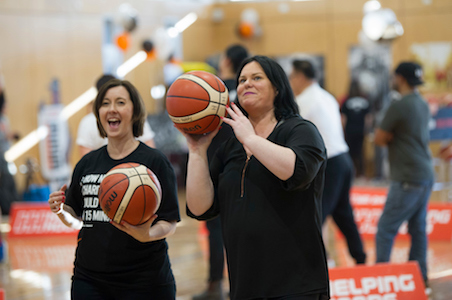 A special thanks goes to Aron Clarke for his support with design and branding for this year’s 24 Hour Charity Shootout. Principle Design also contributed their design expertise, ensuring the event looked and felt great.

Finally, our sincere thanks to the volunteers and event staff who put in countless hours to make the 24 Hour Charity Shootout a huge success. In particular, Teuila Reid and Matt Condo for their work in the lead-up and throughout the event, and the 100-plus volunteers who did everything from rebound basketballs and count shots to administration, set-up/pack-down, and more. A true team effort that is appreciated by all at Helping Hoops.

The 24 Hour Charity Shootout will be heading into its eighth year in 2019. Every year, the event grows and grows, and we cannot wait to start working on setting the bar even higher with the eighth instalment of the Shootout. Watch this space. 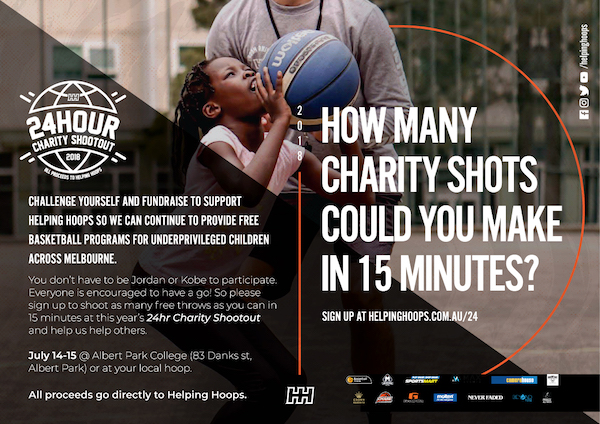