Helping Hoops started 10 years ago, as an idea to provide children and young people with a different pathway to access basketball. Founder and former Executive Director, Adam McKay shares that we came about;

“To break down barriers and provide children and young people with opportunities to participate in after-school activities. This was the simple idea that inspired me to embark on a journey that would eventually lead to the organisation we now know as Helping Hoops in 2009. At the time, I assumed there was a basketball charity out there already in Melbourne, running free programs for kids, who didn’t have access to the sport. I wanted to find such an organisation and volunteer.

As it turns out, at that time, it didn’t exist.

This surprised me. Of course, there were inclusion programs within established basketball clubs and associations, but there wasn’t a group that had this aim as its sole focus—participation over competition, relationships over performance, cultivating social skills, creating a sense of community in an increasingly diverse Melbourne, and eliminating barriers of cost and transport so that “everyone’s game” truly is a game for all.” 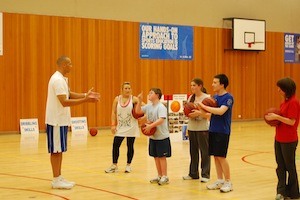 October 5, 2010 was the date of our first official session. From there, we found our rhythm and slowly built an identity that was a foundation for years to come. Heading into 2011, we expanded to three programs—one for young people from a migrant and refugee background in Melbourne’s west, and another for children with special needs. The next year saw us grow yet again, this time to Fitzroy’s public housing estate, and in Dandenong. 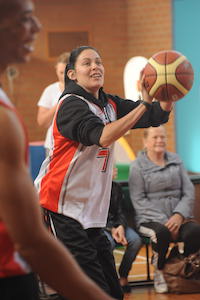 Tegan Cunningham in action at the inaugural Charity Shootout in 2012.

2012 was a historic year for Helping Hoops as we launched our first annual 24 Hour Charity Shootout. The event, which sees people register to shoot as many free throws as they can in 15 minutes while raising money for Helping Hoops in the lead up, was borne out of necessity at a time where our charity was experiencing some major financial challenges. The inaugural Charity Shootout was put together in only four weeks, which gives a glimpse of where we were at and the urgency around fundraising. Despite being a humble event, we knew immediately that the format was something we could build on. The Charity Shootout has grown each and every year, both in terms of fundraising and what it means to us and the wider basketball community.

Growing—and introducing systems and structure to aid this growth—was the theme throughout 2013 and 2014. The Helping Hoops brand began to establish a foothold thanks to the efforts of our coaches and the dozens of volunteers who assisted them every week. We began to expand our partnerships off the court, and were beginning to enter an exciting new phase. With support building throughout the wider community, and the efforts of our committee, we were becoming more strategic, efficient and effective as an organisation.

In those years, we were growing into a resilient organisation built for sustained success. Storytelling through digital platforms allowed us to share this success with the public, for them to see what Helping Hoops was doing on a weekly basis—what we were all about.

By the end of 2017, we had built our program portfolio to 10. Helping Hoops now had a sizeable presence in inner-city public housing estates, such as Fitzroy, Richmond, North Melbourne and Prahran, had continued to deliver our programs for special needs across two locations, and had spread to suburban communities such as Werribee and Dandenong.

We also acknowledged that our participants were growing up, and many no longer wanted to play with the younger kids anymore. This saw the design of the Future tier of programs which were introduced to continue the relationship we enjoyed with children and young people well into their teenage years, and provide them with an experience more targeted to their needs. Future began as just one program in 2017, but has now expanded to multiple locations. In 2018 we decided it was time for a girls program and so launched, Power at Fitzroy and now located in Kensington. We know our programs will only expand going forward as we strive to cater to the demands of our community.

We continue to expand locations, reaching 12 in 2019, and with no plans to stop anytime soon. In 2019, Helping Hoops Founder, Adam McKay stepped down as Executive Director. Clinton Meehan assumed the role in February 2020. 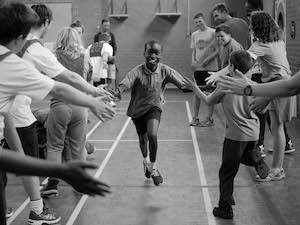 Helping Hoops is collaborative and ambitious in our approach to community. Our programs may still only operate in Melbourne, Australia however our mindset and standards are of a global nature. We want to take what we do and share it with even more communities going forward, in order to support the next generation. We want to work with people and organisations that can help us do this. We want to continue being pioneers of community building, diversity, equity, inclusion and youth empowerment. We want to continue to make a meaningful difference.

The story of Helping Hoops continues…the demands and challenges posed in 2020 have only strengthened our mission, and the depth of relationships with have in communities across Melbourne. We are proud of the work and support we have with numerous values aligned stakeholders that we can learn and grow with. None of this would be possible without our dedicated team of coaches and volunteers who do what it takes week in week out.